Throughout the Festival we showcase an array of new, International short films.

Here's the A-Z of shorts screened at the Green Film Fest 2018.

"As rising sea levels threaten the loss of their motherland in Hawai’i , the Phillipines, China and North America, four women fight to preserve the volcano, ocean, land and air for future generations. In a deeply immersive artistic experience, they channel their mothers and ancestors in song, dance, and poetry, and take a bold and ultimate stand against the corruption of the elements and natural resources by humankind.

AfterEarth is created by a mostly queer, genderqueer and transgender cast and crew of Asian/Pacific Islander elders and youth."

A tale of agriculture and ecoculture. As told by a bee and its box. Inspired by the research of Blue Dasher Farm, and created with beautiful animation.

The history of humanity and of our planet in four mintues, in this single shot animation.

Car Pollution and the Air You Breathe

"Three Indigenous women hold knowledge of Cedar, passed down from their grandmothers and mothers. They commune with this sacred tree as they practice and share their culture and art in both traditional and contemporary contexts. Cedar is a life-giver. Cedar is a transformer.

Cedar Tree of Life reveals how each woman uses the material/medicine of Cedar and how it expresses itself through them. From garments, to homes, to a burial material for those who have passed on, Cedar was and is inextricably linked to all aspects of life for Salish peoples."

"CICLO is an intimate journey through the complete life cycle and complex metamorphosis of the Monarch butterfly, from egg and caterpillar through to chrysalis and butterfly in the heart of the City of Buenos Aires."

For her latest film, Chinese-American director Jessica Kingdon takes us on a tour of China’s Yiwu Market—the largest wholesale consumer goods mall in the world. The film focuses on the daily lives of market vendors and their role in facilitating the flow of the world’s consumer goods and tchotchkes—from phone cases to plastic flowers.

Dignity at a Monumental Scale

When images of everyday Navajo life began appearing at a monumental scale on abandoned buildings, roadside stands and water towers across the Four Corners region, it was a surprise for many in the community to discover it was the work of Chip Thomas (aka Jetsonorama), a long-time resident known by many as a healer of another kind. 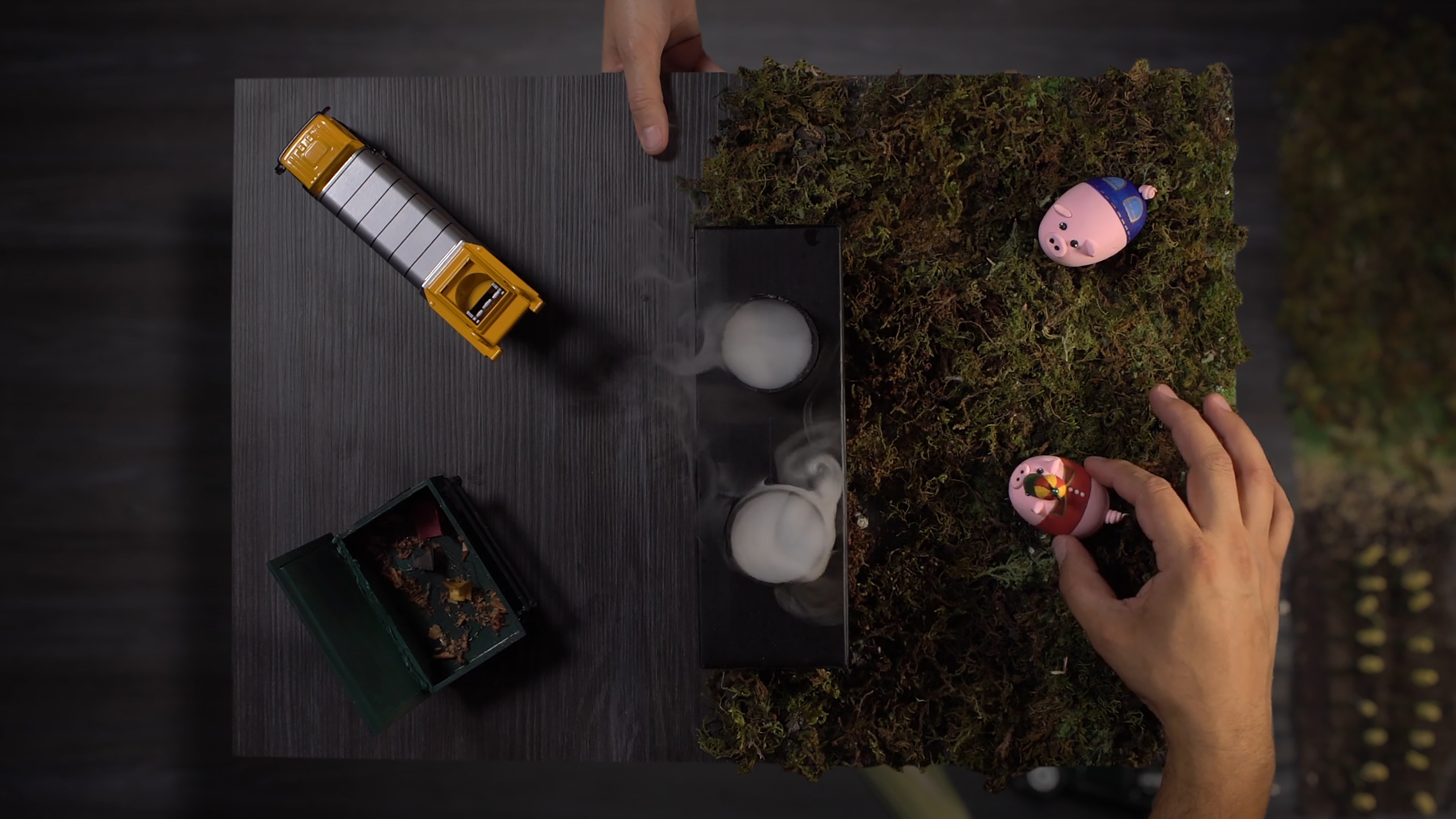 An order of Tacos al Pastor is not what it looks like. Don't Wasty shows the amount of food that is wasted in Mexico in the different phases of the production process: postharvesting, processing, distribution, retail and consumption.

"Like so many of Mao’s pronouncements, it sounded simple. “The South has a lot of water; the North lacks water. So if it can be done, borrowing a little water and bringing it up might do the trick.” And thus, in 1952, the spark was lit for what would blaze to life four decades later as China’s most ambitious engineering project – the South-to-North Water Transfer Project – a scheme to bring some 45 billion cubic meters of water, mostly from the mighty Yangtze and its tributaries, up to the north China plain to Beijing and the parched farmland and factory towns around it. The central route of the project began carrying water from Hubei to Beijing in late 2014, and, like so many of Mao’s plans, it has left a swath of human devastation in its wake.

Lovell and Wang’s focus is on the direct human costs of the transfer—who has won, and who has lost. On the winning end are residents of Beijing’s ever-sprawling suburbs, hoping for reliable showers and clean water to cook with. On the short end of the stick are the people who live in the areas giving up their water, who, without choosing to have had to leave their homes, find new work, leave behind the comforts of community and family, and fathom how their lives fit into the grand and ambitious plans their leaders have devised to solve a nation’s problems."

In a world where the idea of progress appears to be above all, the last inhabitants of a village refuse to let themselves sink into oblivion. Based on interviews about the desertification of Portugal's countryside, this animated documentary combines etching, real life reports, and a fictional narrative.

Sisters Carmelina and Flora Ramos Garcia, both in their late 50s, have been growing some of the world's best coffee in the Western Highlands of Guatemala for over 30 years. But over the last five years, climate change-related impacts including coffee leaf fungus and severe drought have decimated the country's crop, eliminating over 100,000 jobs in Guatemala between 2012-16. This dramatic shift has spurred more out-migration of males and youth to the U.S. – including Flora & Carmelina's children – leaving them behind to face a new normal.

Far Away from Home

In 2014, a bird appeared in Jinshan that has not been seen in Taiwan for over a century – a Siberian white crane – causing a local sensation and a rush to protect its habitat.

"This film by elementary student Natalie Wylie addresses the environmental problems of the meat production industry and outlines the benefits of switching to a plant-based diet. Will Harlan, editor in chief of Blue Ridge Outdoors Magazine, offers his perspective.

From loving her cat, to becoming vegetarian, to directing this environmental film short on the long-term effects of our meat-based consumption habits, Wylie has taken broader strides toward environmental activism than many adults three times her age."

"FLY AWAY is an unexpected, animated adventure about a sea kelp that wants to fly. He is ultimately transformed in this crisp meditation on renewal, the food chain, and aquaculture"

Guanba: Land of the Panda Tribe

GWALA RISING in the Bwanabwana Islands depicts the revitalization of traditional conservation practices in the islands of Papua New Guinea. The community of Anagusa Island is combating the effects of climate change and protecting the coral reefs they rely on using "gwala": the traditional practice of setting aside a reef or forest area to allow the ecosystem to recover. Gwala is helping the community of Anagusa Island prosper - empowering men and women with improved access to food and livelihoods. Winner of the 2018 Sylvia Earle Ocean Conservation Award.

"Young activists decide to break the law to stop a mining company from dumping 250 million tonnes of waste into a Norwegian fjord. On the top of a freezing, icy mountain, 80 youths chained themselves to mining drills to save the fjord, in what became the biggest civil disobedience action in Norway in 30 years. Norway, which proudly brands itself as a ‘green country’ and whose pristine fjords draw hundreds of thousands of tourists each year, is the only country in Europe that allows sea dumping of tailings.
"

In a remote corner of the world, a living relic from a prehistoric age still exists. A creature that once roamed the northern plains alongside mammoths and sabertooth cats. Journey into world unknown to most of us.

Invisible Blanket is based on real events and publications of 1950s when the first climate change scientists started to voice their concerns in major US magazines and newspapers. Their predictions turned out to be rather accurate, yet their voices remained "unheard" for more than half of a century...

In a time of rapidly dwindling global biodiversity, the animals that are earmarked for protection efforts are often those considered by humans to be the most adorable. But what happens to those many curious species under the sun that are just plain … ugly? Should only the cute survive?

Now You See It

The Reel Science Challenge paired scientists with filmmakers and challenged them with creating art from climate science - in just two weeks.

The Importance of Beeing

Our crops depend on bees to be sustained. What can we do to ensure bees' survival?

An exploration of artificial intelligence and the future of humanity.

How the mechanization of food can help capture information that we are at the risk of losing, and how to make tasty food that is also compatible with a healthy environment.

A Change In the Clouds

A story of rainforest conservation, jaguars and other endemic species, and the mystical cloud forests of Panama.

Aerosols is powerful visual and acoustic exploration of climate change and our atmosphere. From the destructive ashes of macro-wildfires to delicate microbic aerosols, beautiful yet just as detrimental.

COWSERIOUSLY takes us into the field to see the difference in how cows can cause degeneration or regeneration, all depending on how we manage them. A media project by Kiss the Ground.

Across Oakland, discarded roadside objects are scrapped for their aluminum, copper, and brass to be sold to recycling centers that ship them across the globe. Through texture and immersion, SCRAP traces the daily life of one metal scrapper and the objects he finds, highlighting survival in the shadow of the world economy.

"An unlikely partnership between religion and government may hold the answer to China’s environmental crisis. Government officials declare their commitment to an “ecological civilization” that draws on Buddhism, Daoism, Confucianism, and other Chinese cultural traditions suppressed under Communism."

"Jia Zhangke’s short film for Greenpeace East Asia depicts the effects of air pollution in northeast China, a region frequently blanketed in dangerous levels of air pollution. Smog Journeys traces two families from two different backgrounds; one a mining family in Hebei province, and the other a trendy middle class family in Beijing. Both face a similar fate. Air pollution is one of China’s most pressing environmental and health issues. Greenpeace calls for a shift from coal to clean renewable energy, as well as short term measures that better safeguard people’s health."

The Story of a Plastic Bottle

"Water Warriors is the story of a community’s successful fight to protect their water from the oil and natural gas industry. In 2013, Texas-based SWN Resources arrived in New Brunswick, Canada to explore for natural gas. The region is known for its forestry, farming and fishing industries, which are both commercial and small-scale subsistence operations that rural communities depend on. In response, a multicultural group of unlikely warriors set up a series of road blockades, sometimes on fire, preventing exploration. After months of resistance, their efforts not only halted drilling; they elected a new government and won an indefinite moratorium on fracking in the province."

Wind Should Be Heard Not Seen

A lyrical journey through countries and cultures, connected by an unlikely foe: dust. Originating in the deserts of Western China, gigantic dust clouds rise, engulfing everything in their path. Blowing across the globe, the film rides the winds of our changing planet, connecting us all through the air we breathe. Taking its name from a Mongolian proverb - “wind should be heard, but never seen” - the film bears witness to human adaptation in the face of increasing environmental change: but is it our greatest strength, or our downfall?