Broadcast coverage of climate change in recent years has not been devoted to telling the most critical stories. Complex issues are glossed over, reports are buried, and climate-talk is dominated by the Trump Administration. We must continue to fight to ensure that the truth is reaching the public by bringing fearless independent filmmakers from around the globe to share their crucial stories. 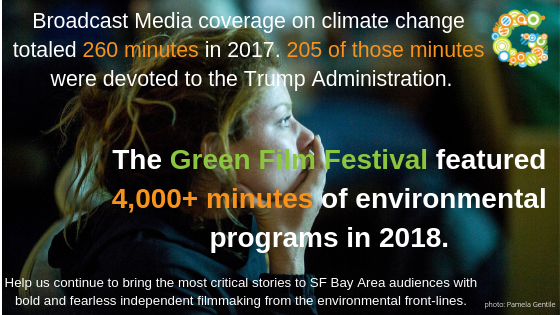 The Trump Administration's Attack on and Manipulation of Mainstream Media

It's no secret that Trump and his administration are hostile towards journalists and the media. From aggressive condemnation to deliberate obstruction, Trump has made this clear. It is easy to forget that while the heavy finger-pointing and noisy twitter battles ensue, history is being made and impactful policies are being decided behind the scenes.

In the latest mandatory U.S. National Climate Assessment, federal scientists officially reported that we must act now on climate reform to prevent serious and lasting damage to our environment, people, economy, and health.

A study on 2017 coverage of climate change by MediaMatters found that among the top 5 broadcast TV networks (including ABC, NBC, CBS, FOX, and PBS), there were only 260 minutes of broadcast coverage on climate change for the entire year, 205 of which revolved around the Trump administration.

These outlets largely neglected critical stories of climate impact on everyday people, the global economy, national security, and extreme catastrophic weather, instead focusing on whether the President believes climate change is real or not. The result is that many of the mainstream public are not getting reporting on, context of, or explanation for very real dangers and concerns that we must address as a whole if they are to be challenged and overcome.

Meanwhile, the Green Film Festival curated over 3,700+ minutes (60+ hours) of environmental programs during the 2017 Festival alone. Sharing these stories from the environmental front-lines is crucial to build an educated, inspired, proactive eco-movement.

We cannot produce the Festival without the generous donations from our dedicated members. Help us continue to share these stories, expand our audiences, and support our global environmental film festival partners in the Green Film Network with your support today. t