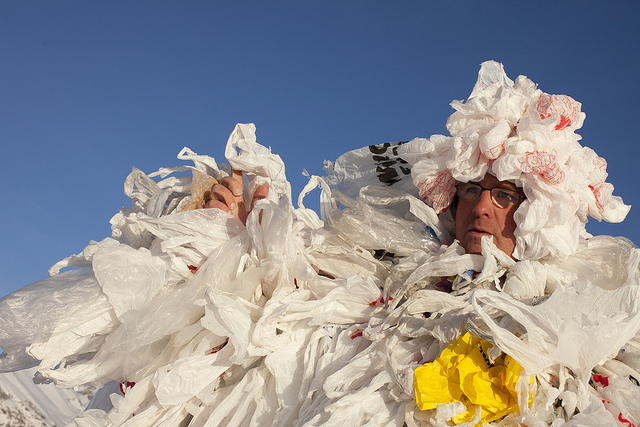 By making Bag It (Suzan Beraza, 2010) the star of the Opening Night of the 2011 SFGFF, audiences were inspired to draw the connection between their day-to-day activities – using single use plastic bags – and the depletion of marine life in our oceans.

The award-winning documentary Bag It starts with exploring the challenge to spend a day without using a plastic bag. This light-hearted tale soon begins to unravel the complexities of the plastic bag industry, the impact that plastic production and the disposal of it has on our oceans, and how it affects human health.

SFGFF 2011 screened Bag It knowing that plastic is a hot topic in California. Plastic is all around us, and it does not decompose. Twelve billion single use plastic bags are used by Californians every year; one million of those end up in the Bay. Many of us love to visit the beach; but do we ever ask ourselves whether it will remain beautiful and teeming with marine life for our next visit? Or, even more important, do we question our own actions and what we can do to protect oceanic flora and fauna? The environmental impact of using disposable plastic bags is devastating to our open waters – the plastic flows into creeks, chokes wetlands and harms wildlife.

As well as the deadly impact on marine life – animals eating plastic or becoming entangled in it – the film highlights the impact of Bisphenol A (or BPA), a chemical produced in large quantities for use primarily in the production of polycarbonate plastics, on our health. Many audience members were unaware of the toxicity of BPA and its associated risks and were appalled to discover what harmful effects it has on our health. An item we use for just a few minutes should not have such a long lasting impact on our health and environment.

But the documentary Bag It was not just informative. Being the spotlight of the Opening Night screening, with the producer present at the following Q&A, the screening ignited a lively discussion, prompting the audience to reflect on what each one of us can do to reduce plastic in our lives. This debate was continued at the “No Plastic” Opening Party, bringing together film, art and music to raise awareness of plastic waste – a huge success!

Community-wide interest in Bag It continued after the Festival. SFGFF presented six further screenings of Bag It in local libraries, each with an introduction from an expert, giving communities across the City a chance to see this moving documentary and engage in discussions with like-minded individuals. San Francisco’s recent checkout ordinance, banning plastic bags at all retail stores and imposing a 10-cent charge for all other bags handed out by the store, only demonstrates how up-to-date this topic is, now more than ever.

And the campaign kept on rolling. In October 2013, the ban extended to restaurants, too and over 50 Californian communities implemented a plastic bag ban. In September 2014, California banned single-use plastic bags, becoming the first state in the USA to do so.

The same happened with other plastic problems highlighted in the film. In September 2010 Canada became the first country to declare BPA a toxic substance. Since then the European Union, Canada, and recently the United States have banned BPA use in baby bottles.

Bringing Bag It to a San Francisco audience provided an uplifting and engaging way to get people thinking about how they can play their part in protecting the environment by making informed choices when it comes to using single use plastic bags.