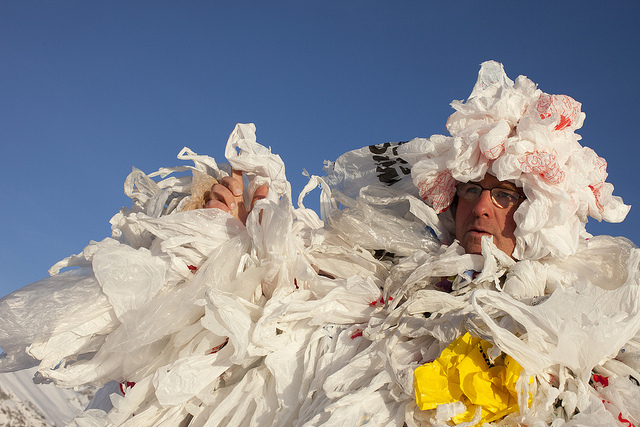 This week, Governor Brown signed historic legislation that will ban the use of single-use plastic bags in California, the first state in the USA to do so. Why is this important? Americans use 60,000 plastic bags every five minutes, disposable bags that they throw away without much thought. But where is "away"? Where do the bags and other plastics end up, and at what cost to the environment, marine life, and human health?

To find out more, check out these illuminating films from our Festival archive:

The film that launched 1,000 actions, you may remember Bag It! as our Opening Night premiere at the first ever Green Film Festival in 2011. Bag It! follows “everyman” Jeb Berrier as he navigates our plastic world. Jeb is not a radical environmentalist, but an average American who decides to take a closer look at our cultural love affair with plastics. Jeb’s journey in this documentary film starts with simple questions: Are plastic bags really necessary? What are plastic bags made from? What happens to plastic bags after they are discarded? What he learns quickly grows far beyond plastic bags…

Commissioned by Oakland's Green Sangha, Plastic State of Mind quickly became a viral hit online. The power of music and comedy can go a long way…

In a not too distant future, a Plastic Bag (voiced by Werner Herzog) goes on an epic journey in search of its lost Maker, wondering if there is any point to life without her. The Bag encounters strange creatures, brief love in the sky, a colony of prophetic torn bags on a fence and the unknown. To be with its own kind, the Bag goes deep under the oceans into 500 nautical miles of spinning garbage known as the North Pacific Trash Vortex. Will our Plastic Bag be able to forget its Maker there?

Follow Jeremy Irons on an emotional journey that looks closely at the consequences of our ever-growing piles of trash. Writer/director Candida Brady exposes the consequences of our over-consumption - and goes in search of solutions. With Irons as our engaging guide and with an urgent score by Vangelis, Trashed conveys both the horror of our current situation and the hope that things can change.

A brilliantly animated short film from Save the Bay and Free Range Studios. Approximately one million plastic bags pollute San Francisco Bay each year, that’s 100 bags for every seal, duck, and pelican combined. Learn more about bag pollution in the Bay at savesfbay.org/bay-vs-bag

It's time to Bag It!

Bag Monsters at the first Green Film Festival in 2011.